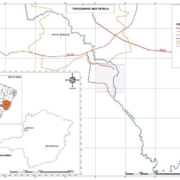 BELO HORIZONTE, BRAZIL–(August 3, 2016) – Jupiter Gold Corporation (“Jupiter Gold” or the “Company”) is a new Brazil-focused gold company. Today, Jupiter Gold, through its local subsidiary, received from the Brazilian mining department, Departamento Nacional de Produção Mineral (“DNPM”), the ownership for the mineral right designated by the number 831.883/2016 in DNPM’s database. Its current status level within DNPM is that of exploration permit (“Requerimento de Pesquisa”), the initial stage for a mineral property.

DNPM 831.883/2016 is located in the municipality of Paracatu, state of Minas Gerais, in Brazil. The city of Paracatu was founded in the early 17th century by pioneers searching for gold and silver.  Today, Paracatu is a city with 100,000 inhabitants. Only 1.2 miles from city center sits the largest gold mine in Brazil, on a deposit named “Morro do Ouro”, which is owned and operated by Kinross Gold, one of the world’s largest gold producers. It annually produces 480,000 ounces of gold and is also the largest gold deposit in Brazil, with 16 million ounces of gold (6 million ounces of past production and 9.6 million ounces in reserves, as of 2015 Kinross Gold’s published estimates).

Paracatu is located in the northwest part of the state of Minas Gerais, approximately 300 miles from Belo Horizonte, the capital of the state of Minas Gerais. Paracatu is also located 125 miles from Brasilia, the capital of Brazil. It has a regional airport with flights to these cities and others. The city has all of the infrastructure and labor needed for mining research and exploration.

There has been extensive gold production in the Paracatu region from alluvial deposits, mainly along a river stream called “Córrego do Ouro” and also known as “Córrego do Rico.”  This watercourse that starts near Morro do Ouro mine has, for millions of years, eroded rock and transported gold for the formation of alluvial deposits. Our mineral right DNPM 831.883/2016 is crossed by such watercourse.

Mineralization in DNPM 831.883/2016 is likely to be secondary and gold could potentially be retrieved from the alluvium by GRUs.

We note that that as of now this property is without known reserves, according to such the definition under the SEC’s Industry Guide 7. In further compliance with Industry Guide 7, we state that our proposed program for this area is exploratory in nature.

Jupiter Gold Corporation (“Jupiter Gold”) is focused on gold projects in Brazil. More information on Jupiter Gold is at www.jupitergoldcorp.com.

This press release contains forward-looking statements made under the “safe harbor” provisions of the U.S. Private Securities Litigation Reform Act of 1995. Forward looking statements are based upon the current plans, estimates and projections of Jupiter Gold Corporation’s management and are subject to risks and uncertainties, which could cause actual results to differ from the forward- looking statements. Such statements include, among others, those concerning market and industry segment growth and demand and acceptance of new and existing products; any projections of production, reserves, sales, earnings, revenue, margins or other financial items; any statements of the plans, strategies and objectives of management for future operations; any statements regarding future economic conditions or performance; uncertainties related to conducting business in Brazil, as well as all assumptions, expectations, predictions, intentions or beliefs about future events. Therefore, you should not place undue reliance on these forward-looking statements. The following factors, among others, could cause actual results to differ from those set forth in the forward-looking statements: business conditions in Brazil, general economic conditions, geopolitical events and regulatory changes, availability of capital, Jupiter Gold Corporation’s ability to maintain its competitive position and dependence on key management. This press release does not constitute an offer to sell or the solicitation of an offer to buy any security and shall not constitute an offer, solicitation or sale of any securities in any jurisdiction in which such offer, solicitation or sale would be unlawful prior to registration or qualification under the securities laws of such jurisdiction.